There are two types of slewing ring damage, one is the raceway damage, and the other is the broken tooth. The raceway damage accounts for more than 98%, so the quality of the raceway is a key factor affecting the life of the slewing ring. Among them, raceway hardness, hardened layer depth, raceway curvature radius and contact angle are the four most important factors that affect raceway quality. 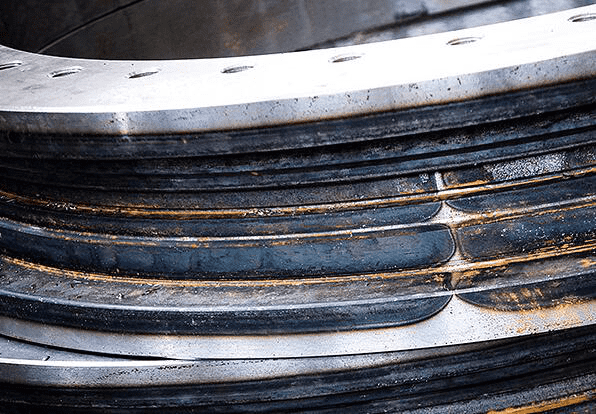 2.Depth of hardened layer of raceway

The necessary depth of hardened layer is the guarantee that the slewing ring raceway does not spall. When the slewing bearing bears the external load, the steel ball and the raceway change from point contact to surface contact, and the contact surface is an elliptical surface. In addition to the compressive stress, the raceway is also subject to shear stress, and the maximum shear stress occurs at a depth of 0.47a (the major semi-axis of the contact ellipse) below the surface, This is also the reason why the hardened layer depth is specified in the standard according to the diameter of the steel ball instead of the diameter of the slewing ring, and the minimum guaranteed value is given in the standard. The rated static load C of the bearing is proportional to the depth of the hardened layer H0.908. If the hardened layer depth required to be 4mm is only quenched to 2.5mm, the bearing static load C will be reduced from 1 to 0.65, the probability of damage to the slewing bearing due to fatigue peeling will be greatly increased.

3.Curvature radius of the raceway

It can be seen from the above table that the larger the radius ratio, the lower the rated static load and the shorter the service life.

Thanks for reviewing this article, if you have any question on slewing ring bearing, just feel free to contact us!